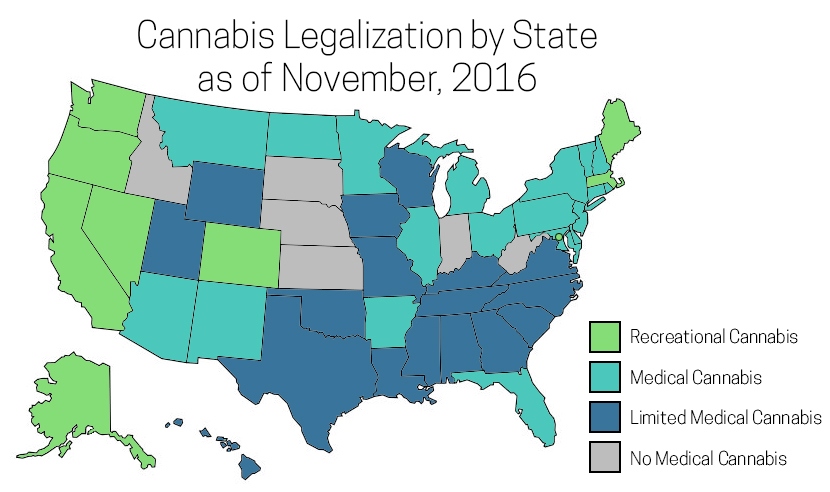 Cannabis on the Ballots, 2016 Presidential Election

It’s been a tumultuous year for voters in America, and for cannabis advocates. In addition to selecting a new president for the USA, many states had the opportunity to vote on important cannabis reform measures. America waited in suspense for the closing of the polls on November 8th, when Trump won the US presidential election. Five states voted on recreational cannabis use for adults (CA, NV, AZ, ME, MA). What does this mean for each state? Read more to find out! 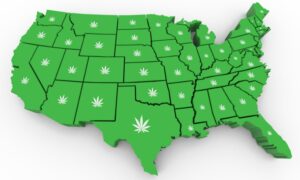 
1. Prop 64 allows adults age 21+ to grow up to six plants at home and possess an ounce of cannabis.
2. Licensing and taxation will most likely not begin until January 2018, but is expected to bring in hundreds of millions of dollars (with the potential to exceed $1 billion annually).
3. Smoking cannabis in public will remain illegal. Driving while impaired by cannabis will also remain illegal.
4. Recreational cannabis stores will not be permitted within 600 feet of places where children are commonly present (ie- daycares and schools). Businesses that sell alcohol or tobacco can’t sell cannabis.
5. Local governments can ban commercial marijuana transactions by ordinance. Despite this, they cannot ban the provision which allows private cultivation at home.
6. Those with prior marijuana convictions may be able to have charges lessened or dropped from their records. This could alleviate plenty stress currently placed on the prison systems in California.
7.  Medical dispensaries cannot sell to recreational users.
8. The production of industrial hemp is allowed by California farmers and will be regulated by the state’s Department of Food and Agriculture.

1. After January 1st, adults 21+ can possess up to 1 ounce of cannabis, or one-eighth of an ounce of cannabis concentrate.
2. Although cannabis in Nevada will be legal, smoking or consuming it in public will remain outlawed, punishable by a fine of up to $600.
3. The number of retail shops in Nevada will be limited by counties’ populations. Medical marijuana dispensaries operating now will have favorable access to those retail licenses.
4. The same as in California, driving while high will continue to be a punishable crime. The marijuana DUI law is not affected by the passing of Question 2.
5. Companies will still be able to drug-test employees for marijuana and terminate them for failed tests.

1. Adults 21+ may possess up to 10 ounces of cannabis at home in Massachusetts.
2. Residents will be allowed to grow up to six plants, with a maximum household limit of 12 plants. (This means that even if there are three or more adults living together, they can’t grow more than a dozen plants.)
3. Adults may posses up to one ounce of cannabis in public. Public consumption will remain illegal.
4. Sales will be restricted to licensed stores, determined by the new Cannabis Control Commission (CCC). The organization will develop and enforce state regulations. They will issue licenses to retailers as well as commercial growers, product testers, marijuana researchers and cannabis social clubs.
5. All retail sales will be charged a 3.75% excise tax on top of the 6.25% state tax. Cities and towns can also add a local tax of up to 2%. So depending on where it’s purchased, buyers will pay a tax that is anywhere between 10%-12% on all cannabis purchases. (On a positive note, this tax is lower than the 15% rate that states like Arizona and Nevada are planning to impose on their markets. In Washington, the tax is a staggering 37%!)

1. Adults 21+ may purchase and possess up to 2.5 ounces of marijuana in Maine. (By the way, that’s more than twice the amount that can be legally carried in Colorado and Oregon.)
2. Residents will also be allowed to grow twice as many plants as in Colorado, and three times as many as Oregon. Maine residents may cultivate up to 12 plants, so long as no more than 6 are flowering at a time. (Meanwhile, having 12 plants in any stage of growth would be a felony in both CO and OR.)
3. Visitors will be able to consume marijuana in social clubs, but public consumption will remain illegal.
4. Sales will be restricted to licensed retailers, but cities can put a limit on the number of marijuana retailers allowed to operate in their municipality. A 10% sales tax will be charged on all recreational marijuana sales, which is lower than the tax rates in the other legal states right now.

Arizona seems to have lost the battle for recreational marijuana for a myriad of reasons (besides the obvious, that there are plenty of voters who oppose cannabis due to personal beliefs, anti-cannabis lobbying efforts, media propaganda, etc). It is arguable that prop 205 could have passed, had the law been written better. Many voters who are pro cannabis actually ended up voting against this measure. Things such as the allowed amounts for possession were still too restrictive to be considered “truly legalized”–such as the case with alcohol, where isn’t a limit to how much alcohol someone may buy or posses, for instance. Perhaps with more carefully thought out rules and regulations, the USA could see recreational legalization in Arizona’s future. We certainly hope so!

As both recreational and medical marijuana laws continue to pass in the US, it’s only a matter of time before cannabis is due to be rescheduled. Eight states now allow recreational cannabis. The statistics don’t lie either; the majority of Americans are in favor of taxed, regulated, and legalized cannabis. Ai’s lab-grade extraction equipment can be found in high end cannabis processing facilities across the country, helping to provide the cleanest and safest medicine available today. Our vacuum ovens, rotary evaporators, rosin presses, short path distillation kits, glass reactors, and vacuum pumps have long been an industry standard. We look forward to continuing to supply to cannabis industry with the best in extraction technology as more states gain legalization of both medical and recreational cannabis.

Join us next week for our discussion about the states that passed medical cannabis this year. We’ll be highlighting the most crucial information from each state. Stay tuned!