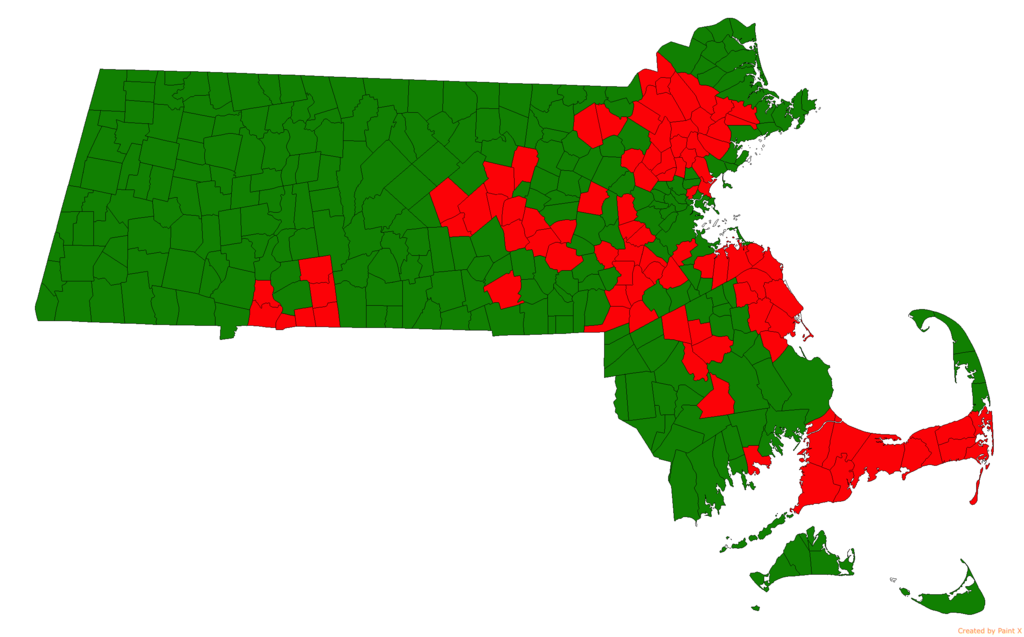 Is Massachusetts the Forerunner in an East Coast Legalization Trend? 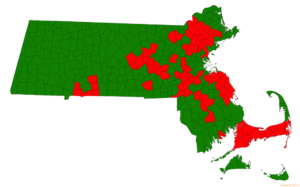 Areas in Mass. who voted for legalization are in green, against in red.

On Tuesday, November 20 Massachusetts became the first East Coast state to open recreational cannabis shops, a benchmark that’s sure to make waves across the region and the country. While the East Coast is considered liberal, it’s thought more reserved and less radical than West Coast states, all of which have already launched such programs. On the Eastern Seaboard, Vermont legalized through its legislature, the first state to do so. Massachusetts, however, is the first to establish a legal, retail market.

In Vermont, it’s legal for adults to possess up to one ounce of flower, and two mature and four immature plants at one time. Yet, Vermont hasn’t outlined the legal framework for a recreational market. Maine has. But it won’t have such shops until 2019.

That leaves Massachusetts as the sole state allowing recreational sales, some two years after voters decided to allow a recreational program within their borders. Being a haven for college students, tourists, and itself one of the wealthiest states in the nation, the recreational market is expected to be worth $325 million this year and up to $1 billion by 2020.

What Impact will Massachusetts Have?

The significance can’t be overlooked. It’s one thing for far away states like Washington State and Colorado to legalize. It’s another for East Coasters to see a well-regarded state in their own backyard doing so. The densely populated East Coast potentially offers a tremendous boon to cannabis enterprises. Significant business opportunities, job growth, and a substantial tax haul are likely to instigate conversations in statehouses and kitchen tables across the region. What’s more, Massachusetts’s cannabis businesses could see significant investment, as an overall march toward federal liberalization appears likely.

Other states in New England have been considering legalization. For instance, New Hampshire–which has decriminalized possession of small amounts. Yet, it’s still investigating how legalization might affect the state. Rhode Island and Connecticut have been looking into it as well. Still, the debate rages on in those states. The next East Coast state likely to legalize is New Jersey. Pennsylvania and New York are sure to follow.

In the Garden State, Governor Phil Murphy, Senate President Stephen Sweeney, and  Assembly Speaker Craig Coughlin–all Democrats, agree on legalization. Still, there are holdouts. But the real piece of the legislation to be worked out is how it can be designed to help minority communities which have been hurt by the drug war. How that piece will take shape is not exactly known and is still being debated.

November 26 has been set for a committee vote. Note there have been several such deadlines before, and each has been surpassed. That’s likely to change, soon. New Jersey wants to beat out Pennsylvania and New York, who are themselves debating legalization. Jersey hopes to legalize first and enjoy a huge tax windfall and a boost to its economy from New Yorkers and Philadelphians who are likely to flood in, each just a short ride away.

Our 10-liter kit with valved adapters is the perfect choice. This kit has a recently redesigned 5-liter distillation head with a larger vacuum jacket, which means better heat retention. An increased internal diameter equals greater efficiency in fractioning, with no chance of clogging. Each glass piece is made of heavy wall glassware, fashioned from borosilicate glass 3.3–the most heat, cold, and corrosion resistant around.

For winterization or pesticide remediation, we recommend one of our jacketed glass reactors. Our 20-liter model is quite popular. It has an adjustable stirring rate with great torque, and can also stir at high speeds. It’s versatile due to a wide temperature range, from -110°F to 400°F. Solvent resistant PTFE on all sealing components ensures it’s durable and long-lasting. Here too, all the glassware is made of food-grade borosilicate glass, which is extremely rugged and durable.

Need to store product or flash freeze it? Pick up one of our ultra-low freezers. Our 27-cu ft. model is commonly used throughout the industry. This freezer is easy to use via a large 7″ touchscreen LCD display. It can even graph time and temperature information for you. Safety features include a power failure alarm, a door open alarm, a filter clogging alarm, password protection, a locking door, and more. It even has a 72-hour backup battery. The freezer is extremely quiet and reliable. An all stainless steel interior makes it durable and easy to clean. And it even comes UL/CSA certified standard.

To learn more about the situation in Massachusetts, click here: