If you are new to cannabis extraction you may be asking, what is decarboxylation?  When is it done? And what equipment is used for this process?

Decarboxylation is the chemical reaction responsible for removing a carboxyl group from a given molecule. In cannabis extraction, it primarily refers to converting acidic cannabinoids to their psychoactive, non-acidic, forms. The best example is Δ9Tetrahydrocannabinolic acid being decarboxylated into Δ9 Tetrahydrocannabinol . The majority of phytocannabinoids harvested from hemp, and marijuana plants, have the carboxyl group attached, it is because of this that decarboxylation will need to be done at some point.

The Chemistry behind it 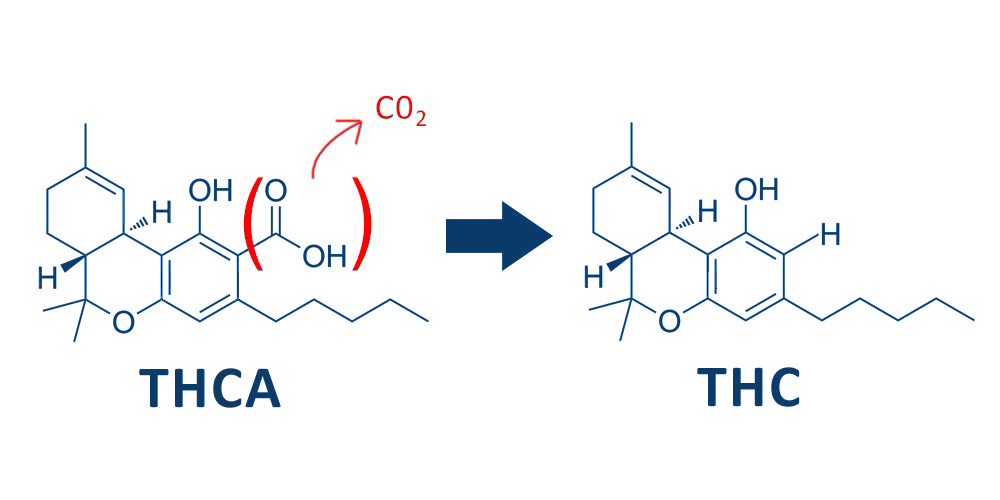 When is decarboxylation done?

Decarboxylation, often referred to as “decarb”, can be done at several points in the cannabis extraction process. The two most common times are after the plant material has been harvested, and once a crude oil has been extracted.

Traditionally, the use of heat and combustion are the primary methods for converting the THCA to THC , this can be seen as someone smokes cannabis flower. The flame and heat decarb the THCA on the flower, converting it to THC, as it is being inhaled. This same principle can be used on plant material that is destined for extraction. A very popular method of decarboxylating plant material, pre-extraction, is to utilize a vacuum oven or forced air oven. The plant material, often filled in mesh bags, will be placed in the oven, and subjected to moderate heat (as well as possible vacuum) for a certain duration of time, after which the cannabinoids on the plant material will have been converted to their neutral, or psychoactive forms.

The most popular method of decarboxylation is to apply heat to the crude oil after extraction has been done. Once an initial extraction is completed, the crude oil will have heat, agitation, and often vacuum, applied to it, these three vectors, over a given time, will thoroughly decarboxylate the cannabis oil, making it ready for its next step. On the bench top scale this process may be done on a digital heating mantle. When scaling up to medium and large sized batches, a jacketed reactor is almost always the method of choice.

Why is decarboxylation so important?

Decarboxylation is an essential process for countless reasons. Not only does it increase the THC, or CBD, content of an extract, but it also converts the non-psychoactive compounds into psychoactive compounds. This is crucial when producing edibles, topical products, as well as ingestible tinctures, or any other cannabis product where the end user will not be heating and inhaling the substance. Decarboxylation is also critical as a workup step for fractional distillation, and isolation. Crude oils should always be fully decarbed before processing in a short path or thin film, this is to ensure no disturbance to the vacuum level occurs, as well as no volatile reactions take place under vacuum.